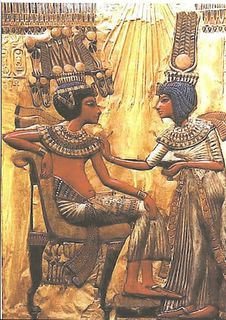 Twenty-eight years ago when the King Tut exhibit first made its way through Chicago, I was just coming out of high school and had not been taught one iota about the Black origins of Ancient Egyptian civilization. But thanks to Third World Press and other African-American publishers, an undercurrent of this much-needed knowledge was available, which gave me a heads up when the Tut tour hit town.

At that time the afrocentric movement was just getting its legs, thanks to great Black pioneer writers such as, J.A. Rogers, Chancellor Williams, Asa Hilliard III and John G. Jackson. But despite efforts from some activists fronts, not as much as a murmur was heard in the mainline media concerning his skin color.

Black-on-Black crime continued to be a favorite subject of network TV, however, and occasionally, we were lauded with another first Black this or that. But for the most part, Africans in America, in Chicago, and the rest of the nation, remained oblivious to this shining example of ancient African classical achievement. At best, media pundits would deflect criticism by saying that skin color was not important in the instance of Egypt. They even went as far as maintaining that the Egyptians were not a race-conscious people.

Well, America certainly is, and Tutankhamun is back in the United States. The exhibit is currently on its first stop, in Los Angeles where it began on June 16, and will remain until mid-November, before heading to Ft. Lauderdale for a December 15 - April 23, 2006 presentation; then on to Chicago from May 26, through January 1, 2007, before concluding the exhibition in Philadelphia from February through September 2007.

But this time things are different. The average person can now simply enter Tutankhamun on his or her World Wide Web search engine and loads of true-to-life portrayals of the pharaoh will emerge. One of my favorites is the exquisite throne back-rest depiction of the king along with his wife Ankhesenamun. In addition, Internet surfers can pull up tomb-wall paintings and study them to their hearts content.

Meanwhile, the purveyors of negative Black imagery are attempting to conduct business as usual. Despite a scientifically conceived and recognized lifelike reconstruction of Tut agreed upon by Britain and New Zealand in 2002, that he is of Negroid lineage; a second group has emerged with a new Caucasian-looking bust, which sits outside the current Los Angeles exhibit where passersby will passively assume Tut was Caucasian.

The clarion call must be made that it’s now or never, brothers and sisters. Blacks around the world must declare who we are, who we’ve been in the past, and how we will be dealt with in the future.

Already the voices of Black activists in California are beginning to be heard. LeGrand Clegg, a historian and City Attorney in Compton, along with the Compton NAACP have been protesting daily, to ensure that the exhibitors don’t hoodwink the huddled masses further. Smartly, LeGrand and the NAACP demonstrators have affixed pictorial representations on their placards depicting Tuya, and other clearly explicit Black-Egyptians of the 17th and 18th Dynasties.

Why is this so important? Let me explain clearly. When the children of tomorrow are born, they ought to arrive in a world that has expunged the burlesque caricatures and parodies that permeated our existence prior to the 1960s; where Rome and Greece were the standard and Black classical cultures had been severed from Africa, leaving her as if she had only spawned traditional societies.

How would Europeans appear if we created propaganda that depicted them as, in total, having bad teeth and playing bajos? Cutting them off from Greece and Rome, we might cast them as mere paleolithic Gauls and barbarians.

Conveniently, given a couple of thousand years, Romans would be portrayed to appear Black, and we would begin to see the Greeks and Italians as mere former slaves at the behest of our great glory. And Europe, it would be cast as the people of the dark forests; severed from the light of our apparent intellectual prowess.

This is not a time to remain silent, brothers and sisters. Let your voices be heard on this issue.

Les Lester is a journalist living in the Twin Cities -- Minneapolis-St. Paul, Minnesota. He has worked in magazine, newspaper and broadcast media. He can be reached at leslester@usfamily.net.

Culture's Cultivating Process Can Liberate Us

In traditional societies, through thousands of years of trial and error, our ancestors developed cultures that sustained them and their way of life. Today, we have the vantage point of history and can readily see how specific cultures have impacted the people groups of the world.

A culture reflects a people's way of doing things and how they interact with one another and the larger society around them. Cultures essentially cultivate groups much like farmers cultivate land and crops. Cultures exist wherever there is a meeting of people from the smallest to largest of groups. The family, the office, the school and the athletic team all manifest their unique culture.

Interestingly, what each of us bring to a group influences the strengths or weaknesses of the culture at hand. I agree with the mantra that as Black Americans, wherever we are we carry the flag of our people group. Each of us owes it to the other to be the best that we can be.

Black America today is unfortunately saddled with the residuals of a condition born of the oppressive forces of enslavement in this country. And for the first half of the twentieth century—as someone has so aptly described it—"we were in a literal concentration camp," here in America. Meanwhile, since the 1960s, the counterbalancing forces of drugs and dysfunctional families have worked to render our liberation thrust to a near standstill.

Fortunately, conditions can be altered for the better. And a clearer understanding of the role culture can inculcate in the collective purpose of our people is paramount. Inherently, culture in itself can foster an unseen structure that is self perpetuating, negatively or positively.

Recently, while driving down Interstate 94 in Minneapolis, I noted a young White woman in her late teens, perhaps early twenties, standing on an overpass grandly waving in swell swoops a huge American flag to oncoming traffic in a rallying call of the American spirit.

And who shall ever forget the unselfish gallantry of Japanese Kamikazes who plowed their fighter planes into Allied ships, in honor of their throne, during the second world war. The perpetuation of their whole as a people was more important to them than life itself.

Indeed, we as Africans in America have much to be proud of. The Black Panthers, World Class Athletes, and the likes of Martin King and Malcolm X remind us of the ready icons we have at hand to perpetuate our ideals.

Booker T. Washington and others, soon after the slave era, built universities, churches and other institutions that have assisted us, even to this day, in galvanizing our resources and aims for best effect. They have essentially given us a track to run on.

Now, we must rise to the occasion of counterbalancing the oftentimes negative impact of the mass-consumer marketing forces on our culture, which I believe have contributed greatly in thwarting our best-laid efforts of awakening the masses of our population in this country. Prior to the 1960s, what has become known as the mass consumer market was to a great extent nonexistent. Much of our consumption of goods and services was very much reminiscent of the forerunner agrarian society that the world had recently emerged from. Milk, food and other basic consumer goods, for example, were still largely produced and distributed by local farmers or relatively small distribution networks.

Today, huge multinational conglomerates, along with mass media, in their thrust to reach each consumer demographic have used all kinds of advertising and promotional gimmicks to influence purchasing decisions, creating a manufactured reality that is bereft of the soul and cultural support system that marked earlier periods.

The music industry, for one, before the 60s, lacked the intense distribution networks that have emerged. Back then, the bottom line of corporations was kept in check by a more strident moral culture, so the consumer was somewhat protected, relatively speaking.

The fallout has resulted in millions of unwary consumers and youth exhibiting commercially induced value systems bereft of the standards championed just a generation ago. We need a new generation of Americans across ethnic and so-called racial lines to arise, utilizing the precepts gained from our post-modern understanding of culture.

Les Lester is a graduate of the University of Minnesota's Interdisciplinary Program on Global Change, Sustainability and Justice. He received his undergraduate degree from Chicago State University in Mass Communication.