Imhotep, the Father of Medicine, Architect… 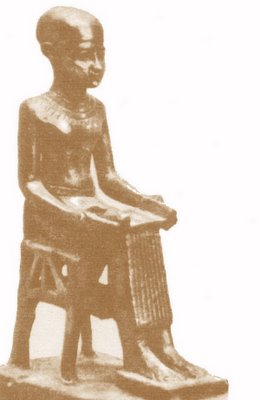 Imhotep has been described as one of the most fascinating people of the ancient world. Considered a genius, he rose from the ranks of the none royals of Kemet (Egypt) to become even more recognized than the pharaohs he served.

Called the Father of Medicine, Imhotep outlined more than ninety anatomical terms and forty-eight injuries in a papyrus he wrote, known today as the Edwin Smith Papyrus. Historians tell us that Imhotep "diagnosed and treated over 200 diseases, i.e., 15 diseases of the abdomen, 11 of the bladder, 10 of the rectum, 29 of the eyes, and 18 of the skin, hair, nails and tongue. Imhotep treated tuberculosis, gallstones, appendicitis, gout and arthritis. He also performed surgery and practiced some dentistry. Imhotep extracted medicine from plants. He also knew the position and function of the vital organs and circulation of the blood system."

In later centuries, he was revered by the Greeks as Asclepius, the god of medicine. And it is believed that he initiated a school of medicine in Memphis, which was noted for over two-thousand years as a place of learning in the ancient world. Today, the serpent and staff symbol of the American Medical Association is derived from traditions surrounding Asclepius.

Also an architect and statesman, Imhotep is attributed with constructing the first pyramid of Egypt, the Step Pyramid, in honor of Pharaoh Djoser, at Saqqara. It still stands today and has been called one of the outstanding engineering feats of the ancient world.