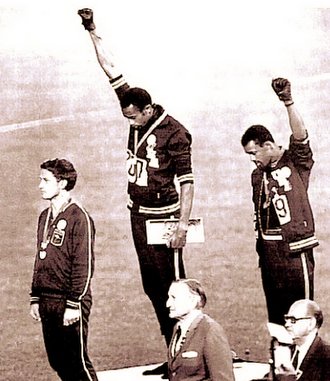 It is one of the most enduring images of Olympics sports history; an image that will inevitably frame the Olympic story of our era. Two-hundred meters gold-medal winner Tommie Smith and bronze-medal winner John Carlos raised clinched black-gloved fists in support of the ongoing Civil Rights Movement in America.

This seminal moment captured the imagination of a generation and contributed to the thrust of the movement.

That’s why I’m rather perplexed by the apparent lack of consciousness among entertainers, in popular culture, who rationalize their complicit corroboration with those whose aim is to crush the spirit of Africans in America.

Reportedly, Damon Wayans, the actor, has recently attempted to copyright the word “Nigga” for a clothes line he has in the works, revealing a callous disdain and social disregard for the masses of Africans, throughout the Diaspora, who might encounter his Nigga brand. It’s likely that he’s ignorant of how semantics can impact the spirit of a people. But just as likely, he doesn’t care, which is even worse.

Let’s define the term "spirit.” It is the inner essence and thought life of an individual, a nation or a people transcending what is seen on the outside. Each individual has an inner life world that is at best nurtured and protected by the cultural forces that be, but in the worst-case scenarios is attacked, vilified and violated.

There has been a very real thrust to diminish the energy and vital force of our struggle, and the hearts of our people. Traditionally, we buttressed our spirits with our songs, whether in popular culture or our spiritual foundation the church.

In the glory days of “Soul Music” we could count on our vocalists, whose roots derived from the church, to evoke lyrics of spiritual sustenance; vocals that penetrated the soul and revived the broken in spirit--so we marched on. Amidst a backdrop of societal oppression--we trudged onward. The church and our music helped us to fan the flames of an inner pilot that could not be extinguished by institutional suppression of our cultural heritage

Wayans, and those of his ilk, meanwhile, represent a new breed of celebrity ready to sell their brethren down the river for thirty pieces of silver. That was not the case of brothas like Tommie Smith and John Carlos. They turned their backs on product endorsements and, instead, faced death threats and censure from those who opposed them.

The arguments of the turncoats, like Wayans, is that they are just responding to the forces of the marketplace. My response is: so were the slave traders of Africa’s past.

How can we protect the spirits of people culturally? We must affirm them through our literature, our songs, our historical heritage, our legacy and our God.

Taking away the positive legacy and traditions of a people is spiritual violence. And to replace it with belittling imagery and semantics is spiritual homicide.