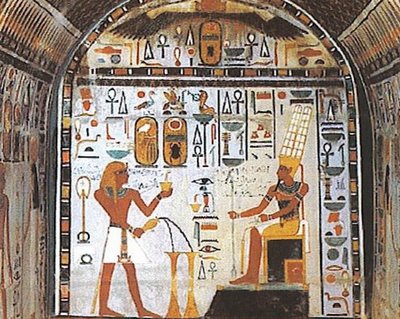 The New Kingdom in Ancient Egypt (Kemet) represented the zenith of Egyptian culture. It was the era of Tutankhamen, Akhenaten, Hatshepsut and Rameses the Great. Ironically, it arose following the humiliating defeat and subjugation to the Hyksos, an Afro-Asiatic nation that overran Kemet and maintained power in the North for over 130 years.

In around 1480 B.C. Thutmoses III, a Theban, rose to power having been co-regent with the female pharaoh Hatshepsut, his stepmother, until her death. Modern Europeans refer to him as the Napoleon of the ancient world and not without good reason.

He expanded Kemet’s borders to her most far-reaching boundaries and initiated an imperialism that there-to-fore had been unheard of. The nation before the Hyksos had been protected and shielded by the desert on both sides and had been comfortable in its relatively secluded oasis along the Nile River. Thus, Kemet had in its earlier periods no need to look outward. But look outward Thutmoses did. He engaged in 17 military campaigns and never lost a battle.

Known as a strong but fair-minded leader, Thutmoses III was beloved and respected during his reign, which re-established control over Syria and Nubia. His victory over the King of Kadesh at the Battle of Megiddo, just months into his tenure, quickly established him as a military genius. He went on to capture territory as far east as the Euphrates River.

One of his hallmarks was the practice of awarding medals to outstanding soldiers who exhibited exemplary prowess on the battlefield -- a custom emulated by America’s George Washington, who introduced the Purple Heart to U.S. forces.