The Study of Afrocentric Classical Cultures 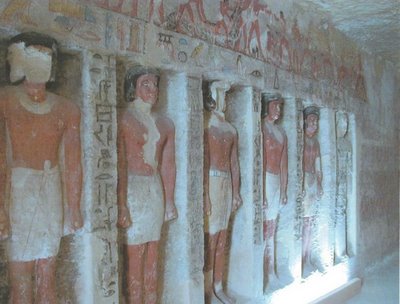 The question of why we need to study classical Afrocentric cultures is being discussed on many levels today. To most of us, it is the hoped for salve to assuage wounded egos. To others, ironically, it represents an intellectual front that is too far removed from the day-to-day struggles of the common man to matter much.

But is it really too far removed? First, Blacks in this culture have been stripped down to a very limited array of characteristics which, in many cases, creates the conditions that seem to demonstrate that we belong in a collective minority status because of some inherent shortcomings on our part.

Indeed, it does make one feel redeemed to know that ancient Black cultures were creating great, classical architecture, while Europe was still thousands of years from emerging out of the dark forests of the North.

It just makes sense, as a group, to work to dislodge ourselves from the ubiquitous web of racism we find ourselves confronted with. Frankly, we must leave no stone unturned in our efforts to ensure that future generations will enter the world on a ‘level playing field.’

Let me lay out what a level-playing field will look like. Children will enter kindergarten with the same access to ancient Black history as they have to ancient White history. In fact, the demarcations of ‘us versus them’ will be eradicated, as the world’s histories blend seamlessly into the story of mankind as a whole--bereft of racism’s undertones. No longer will we be a people without history, for it will be common knowledge that we started history.

Egypt (Kemet) will be seen as the benign forefather of Greece and Rome; the latter two came along some 2,500 years after the emergence of Kemet. The Phoenicians, best known because of the epic Phoenician, or Punic Wars with Rome, and the legendary General Hannibal Barca, of Carthage, will represent Black contemporaries of Rome and Greece. Note that the ubiquitous depictions of Hannibal today are fallaciously illustrated as Caucasian, for the most part.

The ancient city states of Tyre, Byblos and Sidon, of which Phoenicia derived, will be depicted as Black trading partners with Egypt and Nubia; as will other lands spread out from the Middle East to India. Recent DNA testing proved that the ancient people buried in Phoenicia, modern Lebanon, had the same bloodlines as the ancient Egyptians (Kemetians). Most of the modern Lebanese people, however, are derived from later bloodlines, like modern Egyptians.

Africa south of the Sahara, meanwhile, will be proved to have been purposely cut off by the colonizers to disallow the natural diffusion of ideas and culture that would have afforded it the ability to blossom like other areas. Fortunately, Ghana, Mali and Songhay, for example, will serve as representative samples of cultures that arose despite deleterious onslaughts against them.

The term “classical” means of the highest order. It relates to the best a people have been able to produce, not the worst. When we show people the best of themselves, and their culture, they rise to the visions and views they hold in their minds and spirits.