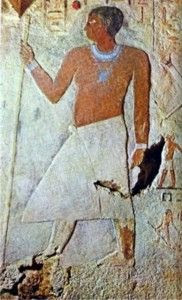 Prince Kawab (Kewab) was the eldest son of Khufu (Cheops) -- Dynasty IV. If there are any questions as to Khufu’s African heritage, one needs only look to his children and relatives to ascertain, for certainty, the African origins of the builder of the Great Pyramid, at Giza.

Kawab’s fresco was discovered on the walls of his daughter Meresankh III’s tomb. It is said that he was Khufu's heir apparent, but never took the throne because of a naturally premature death or a rivalry with his sibling Djedefre.

Kawab was a scribe and aspired to rule in the manner of his grandfather King Sneferu, a cultured and wise king.

His brother Djedefre seems to have ruled only seven or eight years, according to traditional records, and was followed in rulership by his younger brother Khafre, whose likeness can be seen on the face of the Great Sphinx.