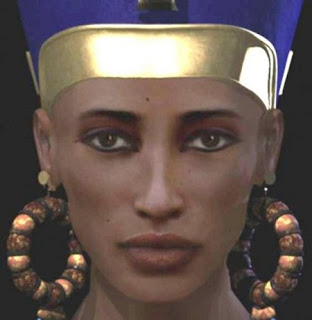 It’s definitive. The iconoclastic Nefertiti bust that has long been used to depict the 18th dynasty queen of Egypt is a hoax. I reported in an earlier post, a few months ago, that based on new research of the artifact itself, scholars have come to realize that the bust depicting a European-looking woman is a fraud. Of course the attendant picture to this article shows what she really looked like (as for pigmentation, this photo is more in line with ancient depictions of her daughters, sister Mutnodjmet, and other 18th dynasty relatives). Thanks to the World Wide Web, and a little research, just about anyone can wade through the charade that has come to represent modern Egyptology. The current iconic German bust was not even reported with the 1912 excavation findings of Ludwig Borchardt, but mysteriously appeared on display in Germany in 1923. In any archeological report, the bust would have taken first place.

The Arabs, meanwhile, have been in Egypt since 639 AD. They, of course, study the history of their time in Egypt in their schools—so this research is nothing new to them. The culprit is the ubiquitous Western mass media that continues to perpetuate the ongoing sham.

It’ll take awhile. But the bust, currently housed in a German museum, will eventually be a vestige of the colonial past that fostered it.