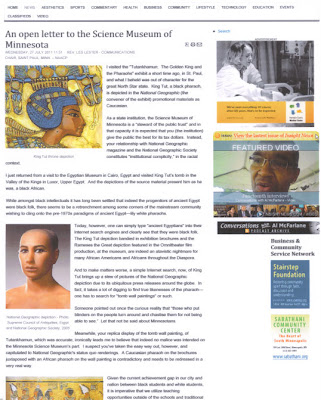 `
Here in the Twin Cities, the NAACP of Saint Paul where I serve as communications chairman, has reached out to local media with "An Open Letter to the Science Museum of Minnesota" concerning the museum's "institutional complicity" in the misrepresentation of the ancient pharaohs--those who reigned for over a millennia prior to the Greek and Roman incursions.  Its National Geographic Society convened exhibit, "Tutankhamun: The Golden King and the Great Pharaohs," which impacts tens of thousands of African Americans in this city and millions around the globe, is blantantly, among other things, showing a documentary in its Omnitheater that depicts all of the pharaohs as Caucasian.  Rameses the II, also known as Rameses the Great, is featured prominently in the film as European-looking.

Thanks to a great African-American newspaper, this story has seen the light of day. Also, Minnesota Public Radio's Facebook page, Art Hounds, made note of the "Letter." But no news stories have been presented by public radio, any of the White newspapers, or the network TV stations. I am in contact with a Black television reporter who has been out of the office, but until he returns to work, I suppose it's business as usual in America's mainstream news industry. I will elaborate on the "black out" of African Americans in the nation's news rooms in another posting.

Here's what we're asking of the "Science Museum of Minnesota" as a corrective measure, since perhaps they're acting unwittingly on behalf of National Geographic. This is the only just way we see to initiate corrective action to the ongoing wrongs that are being depicted daily in the Omnitheater viewings. Why not present ads that feature King Tut as depicted from his tomb-wall painting and or a depiction of Tutankhamen from the throne picture that clearly shows him as African?

The current golden-coffin cover face depiction (that looks like the golden mask), and the little shabti figure (which may or may not be King Tut) continue to obscure the likeness of Tutankhamun, tacitly implying that he is White.  The museum is a steward of the public trust, and tax payers rely on institutions such as the Science Museum of Minnesota to tell the truth.  This is the North Star State. Science Museum of Minnesota, please show 'em where you're from.