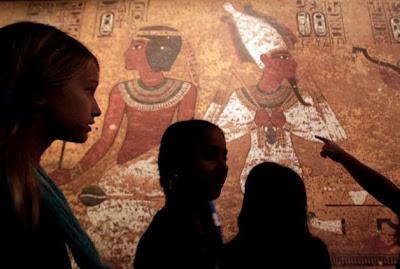 Kudos to the Houston Chronicle for covering this tomb wall painting of King Tut at the current exhibitition in that city. Media depictions of the Black pharaoh(s) and other Africans of the ancient world have been few and far between, in modern culture.

Biblical institutions must also step up and accurately display Blacks justly. The current imagery would have our children believe that African people have perpetually played second fiddle to Europeans, which is a total misnomer. In fact, much of what is called the Middle East today would be called Northeast Africa if proper geometric measures were used. Ancient Africans populated the so-called Middle East to Asia. Cush, Akkad (Akkadians), and Assyria, among others, comprised the Black lands.

Northeast Africans in the Melanesian Islands of New Guinea and Fiji are still evident. Bounded by Europe to the north and Asia to the east, the Middle East today is a region of amalgamized people.