The Ancient Hebrews Were Black People... . 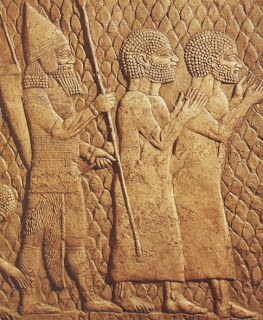 An Assyrian soldier leads Hebrews into captivity in 701 B.C. The reliefs from the walls of the palace of Sennacherib, depicting the seige of Lachish, show definitively that the Hebrews were black men. The pepper corn hair texture is distinct to people of African descent.

Lamentations 5:10 (KJV) "Our skin was black like an oven because of the terrible famine."
Click here for additional source links
Posted by Les Lester at 12/26/2013

Before Rome, there was Etruria. The early period tombs of the Etruscans depict Black men. Bordered roughly in what is now known as the Tuscany region of Italy, Etruria emerged circa 900 to 700 B.C. and lasted until the late 4th century B.C. Rome began as a colony of Etruria.
Posted by Les Lester at 12/11/2013